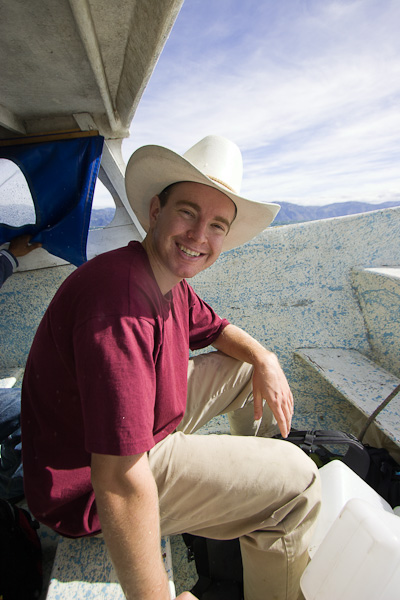 Last Monday, I got a call from my parents that John, my closest friend from middle and high school had died while climbing a 14er in Colorado.  As the news articles came in, further details came to light…  His dog Oof survived the accident, the cause was a massive rockslide, and it was the same route where another hiker died two months ago.  Most tragically, his wife Delmy just found out the Friday before that she was pregnant.
This weekend, I attended a service in his honor at Asbury United Methodist Church in Arnold, MD.  I was asked to speak during the service and prepared a few words to explain John from my perspective.  I have shared those words again here as a tribute to John:

I’ve been John’s friend since we were in the 6th grade.  When I spoke at his wedding, I described the hiking trip we took when we were 17 years old, our first time driving more than an hour without our parents, and our first time backpacking without the supervision of our scout leaders or any other “grown-ups”.  Of course there were mishaps, such as losing the trail and having to bushwhack through a mountainside covered in Mountain Laurel, but we learned how rewarding it can be to lead your own adventures.

Getting ready to begin our backpacking trip in Virginia.

One such adventure became a tradition:  Over Christmas break during college, I convinced a few friends to celebrate the New Year by swimming in the Severn River.  The plan was to go to the beach behind Severn School, strip down to our swimsuits, jump into the water and get back out as quickly as possible.   It should come as no surprise that it was easy to convince John to participate. 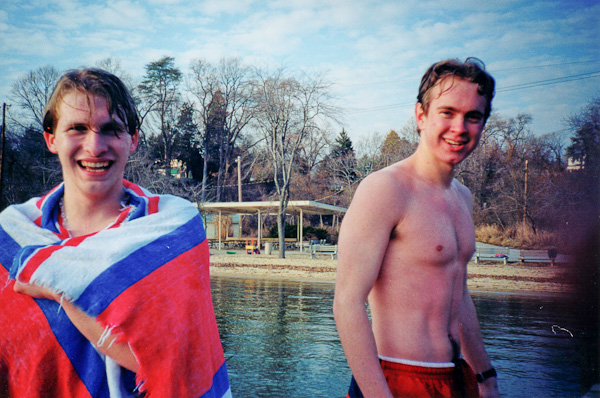 Lastly, it would be incomplete to describe John without explaining his obsession with high places.   I could speak of our trip to the top of several volcanoes in Guatemala, but I would rather share in the story of a more modest high place.  Over Christmas break in 2004, John really wanted to visit a high point that he had researched, the highest point in Anne Arundel County.  If you are familiar with this area, I doubt you are imagining a majestic peak, but you might be thinking of a prominent hill with a nice oak tree.   Well, no; The high point of the county is the highest spot in a nearly flat area which is 100 yards from a minor road, about 200 yards from a cellphone tower and all of 300 feet above sea level.  It was right on the side of someone’s front yard.  We weren’t exactly sure we were on the exact highest point, but I was absolutely certain that we were trespassing. 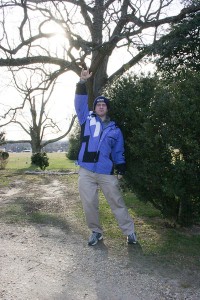 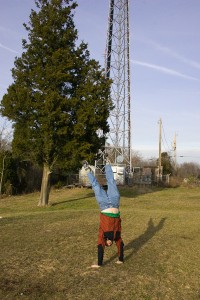 John has always been obsessed with reaching high places professionally and personally.  I have always found the biggest reward for reaching high places were the clear views around me, but I think for John, part of the reward was the ability to see himself more clearly.

John, we will miss you, and we will remember you always, particularly in the highest and the wildest places of the world or the county.

(I should clarify that he went by “Johnny” to everyone except me and his immediate family; I met him before he switched his name.  I think he liked that I always called him John, as it was a reminder that our friendship started so many years ago.)

My tribute was just part of the many kind words shared by family and friends.  His mother started the celebration with a her memories of John, and an account of the accident.  She somehow managed to muster the strength to sing a duet with John’s brother David.   His cousin Amy Martelli expressed her admiration for John’s strength and the bond they shared as oldest siblings in their families.  Shawn Scout shared stories of the times they shared in the Boy Scouts, and Michael Weissman reflected on John’s role as a campaigner for several political campaigns.  Others filled in additional details of John’s life, including the memories of his role in the Peace Corps, and as a friend to so many.  John’s brother David Merrill finished the ceremony by sharing a few more kind words about his brother, before switching to song to celebrate his life.

One story by someone he campainged with on the Howard Dean campaign particularly stuck with me:  John was leading the campaigning for the northernmost district in New Hampshire where they were working to build grass-roots support by going door to door.  As it was winter, on many mornings they would wake up in their cabin to significant snowfall.  When everyone else had declared a snow day, John would simply grab the snow shovel, and start digging out the driveway.  At first, they tried to see how long they could wait before their conscience kicked in, but eventually, they learned that when John put on his boots and grabbed the shovel, it was a work day.

The ceremony was very thoughtful and moving, and it was warming to see the church absolutely filled with those who cared about him and wanted to celebrate his passion for life and his many accomplishments. 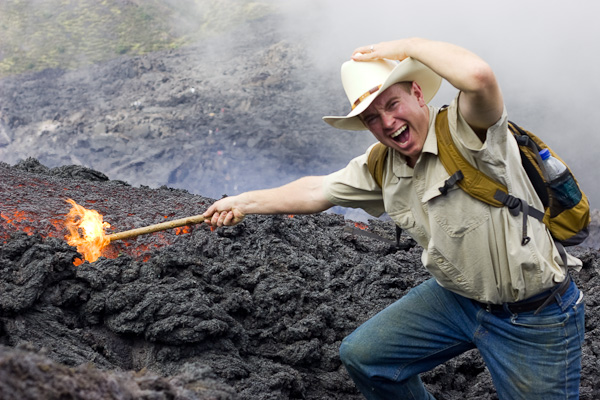 John pushing a stick into an active lava flow on the Pacaya Volcano, Guatemala