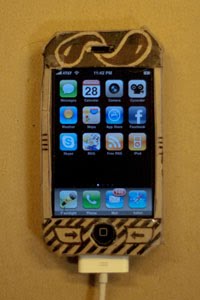 I got a used iPhone from Lisa, (Thank you!) and I have been enjoying the device quite a lot.   In short, it’s a great “lifestyle” device but a so-so phone.  That is a reasonable tradeoff for me, since i make relatively few calls.

This phone is the first generation iPhone, so I don’t get a GPS, or fast 3g data. It also has a crack in the digitizer, but it is in the lower-left corner and not very distracting.  (The digitizer is the glass pane above the screen itself which receives the touch inputs.  On the new iPhone, this is  separate 15$ part that you can replace with some saavy, on this generation, it is glued to the screen itself, so a replacement would cost 100+ dollars, which I am not convinced is worth it.)

I ordered a charging cable online, since I wasn’t that concerned about how the charger looks and feels in everyday use, but I wasn’t really interested in buying a 30$ case for the phone, and the 5$ cases look pretty lousy.  That said, I didn’t want to break the device before buying a case.

I gave myself 10 minutes the other day after lunch, to fashion a makeshift case out of the cardboard backing to an empty legal notepad. I placed the phone face-down in the middle of the cardboard, and traced the outline of the phone.  I drew a circle roughly where the home button is, a big square for the screen and a slit for the speaker, and cut them out with an x-acto.  I made slits at the corners with a pair of scissors, scored the four edges and folded it around the phone.  A couple pieces of scotch tape finished the task in a total of 7 minutes.  The holes for the volume, docking port and camera came later, as did the personalized front plate which was implemented with ink and sharpie. 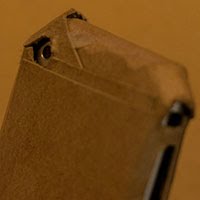 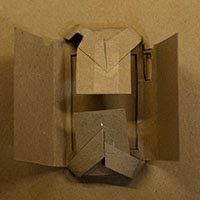 This was easy and fun, and the case is extremely replaceable.  It has even proven itself already in a 2 foot fall (Sean!) onto a hard table.