The New Year begins on a rather unlikely day of the year; it is too early to be the coldest day on average, and it misses the shortest day of the year (winter solstice) by a little over a week.  So why not celebrate this unlikely holiday with an unlikely tradition.

For years, I have used this day as an excuse to plunge myself into the nearest body of water, my own “Polar Bear” swim. In looking back through old photos and videos, I am pretty sure the first time I did this was in 2000, but it may very well have gone undocumented in 1999 or 1998. There isn’t a lot of pomp and circumstance involved, the only real criteria is to completely submerge myself in the water, if only briefly.

The first celebrations were in Maryland, with friends from High School including John Merrill and Chris Moore.  Subsequent celebrations follwed me wherever I was a given year.  In 2001, we had to fight with a thin layer of ice over the water which you wouldn’t think could do any damage, but it cut up our legs pretty well.  I recall a swim on the river in Pittsburgh at CJ Sloan’s River house with Casper.  I also recall a very brisk midwinter swim at RB Winter state park, although I’m not certain it was on New Years Day per-se, or just a chilly bad idea. 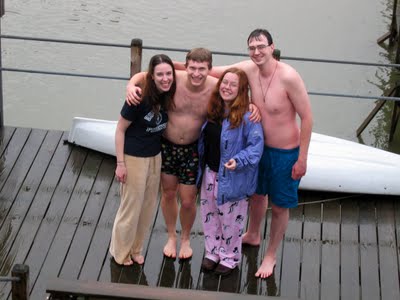 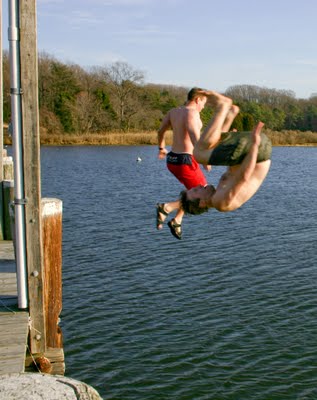 2005/01/01 – Severna Park
More recently, I have celebrated at nearby Waverly Beach Park in Kirkland, WA.  This celebration has been a solo expedition, both being rather quick swims.  In 2009, I got to perform for Amy’s Dad and Sharon who were visiting.  I’m glad he still let us get married.

2009/01/01 – Kirkland
Due to my absentimindedness, I had nearly forgotten my annual tradition until we were making dinner.  Since Andre and Ellie were coming for dinner, I called to warn them about the post-dinner festivities.  They decided to bring swimwear, and lo-and-behold, they decided to give it a try.  This year I was pleased to have co-participants instead of just gawkers. (Amy has no interest in joining in the swim, but is aways happy to hold the camera.) Andre and Ellie took the plunge too. 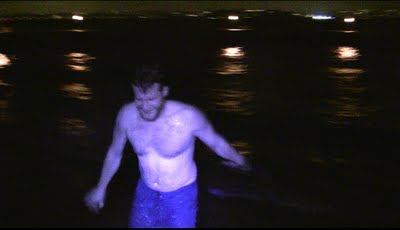 This year, since it was dark, we decided it was smarter to run in to the water from the beach rather than taking the intense plunge off the dock. Knowing that this approach is difficult, since you can back out before completing the dunk, I went at the water at a full run.  It was a good plan, as it was quite chilly out, and I knew the sun woudl not be able to help me warm up after it had set. 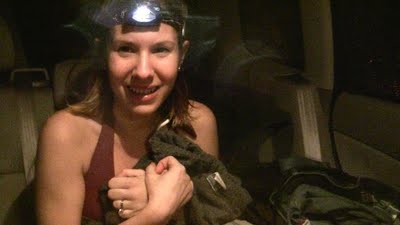 Thanks to all who celebrated with me this year and in year’s past.  Happy New Year!