The secret life of a board game geek…

It’s true, I am famous on the internet!  To see how, you need to read further…

As noted in my recent article, I love board games!  One thing I didn’t have time to go into in that article are the many “expansions” that have come out for many popular games.  Expansions breathe new life to a familiar game by adding new rules and generally add new game components such as advanced pieces, or a new map.  They generally increase the length and complexity of the game they expand, and they vary from a few dollars for a few cards and new rules, to nearly the same price as the game they expand.

As much as I love board games, I am addictied to expansions!  This is despite the fact that they rarely provide significantly more fun than the original game itself.  It’s worth calling out a few ppoular games to see how their expansions extend the gameplay experience:

One of my favorite games, also turns out to be the king of expansions and spin-offs; Carcassonne.   It’s simple design and modular tile-based gameplay is easy to extend and reimagine. Carcassonne has seen 6 mid-sized expansions, 8 small expansions, 7 spin-off games (one is for children) and a card game only tied to the rest of the series by name.  I had collected every expansion and spin-off in the series until recently, when they released a poor game and a poor expansion in the series the same year.  The expansions alone are difficult to keep organized, since they all consist of square tiles which are difficult to distinguish from one another.

This is why I am famous, if only amongst a small number of board game enthusiasts on the popular Boardgamegeek website.  To aid in my own organization, I designed a set of printable “tuck boxes” that store the tiles from one expansion so I can keep them separate from other expansions and the main game.  I designed boxes for a few of my favorite expansions quickly in PowerPoint, printed them on cardstock using a color laser printer and then folded and taped them into perfect little boxes.  Pleased with my work, I shared them with other Carcassonne players. 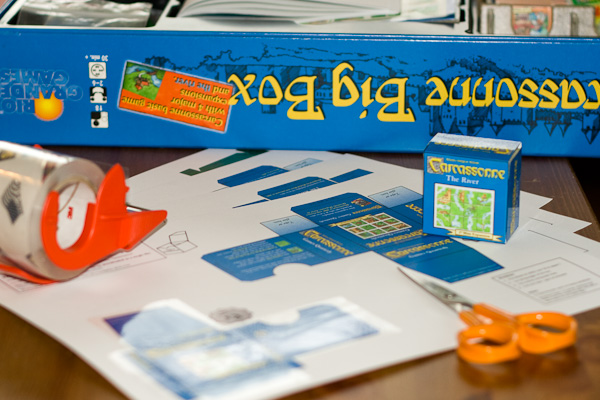 Assembling a Printable Tuckbox for Carcassonne which I designed.

What followed after sharing them on the web is a little strange.  I started getting emails from folks who found my tuckboxes on the web like the following:

I already have several your boxes (for the Cathars, River, the 3rd expansion, the 5th)
I would like you to ask for the others, do you have boxes for the 1st, the 2nd, the 4th

I would like modify it so I can create my own tuck box for a different expansion.

When I updated the tuckboxes to include another expansion, I added a note indicating that I would like to locate a copy of the carcassonne expansion The Cathars, which was release several years earlier with the german gaming magazine Spielbox.  It wasn’t broadly available anymore, except on ebay for 40+ dollars a copy.
A short time later, I got an email from a generous gamer who loved my tuckboxes and offered me his extra copy of the Cathars and the Spielbox magazine for 10$ shipped.  I was amazed by his generosity, and the fact that someone appreciated my work enough to give me a special deal on a difficult to locate item:

I saw in your tuckboxes from boardgamegeek.com that you were wanting a copy of Cathars.  Are you still looking for one, or is this old information?
…
I have all of your tuckboxes, in fact, and use them to be able to store the entire game in the orignal box, which would be impossible otherwise.  …  I particularly like how you have put the expansion name on the top flap, since that is how I store the boxes in the main box.

If that wasn’t strange enough, there is a community of Carcassonne enthusiasts who are constantly producing fan-made expansions to the game.  I was contacted by one member of that community who wanted to use my templates to create tuckboxes for his fan-made expansions. 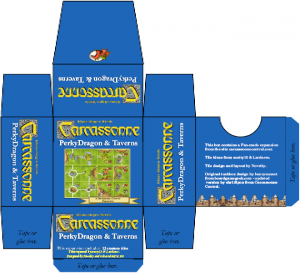 Tuckbox for a fan-made expansion made by someone else based on my design.
I have continued to get ideas, requests, thanks and general appreciation for my work via email and the boardgamegeek website.  It always makes me smile when I get another friendly message for my work. 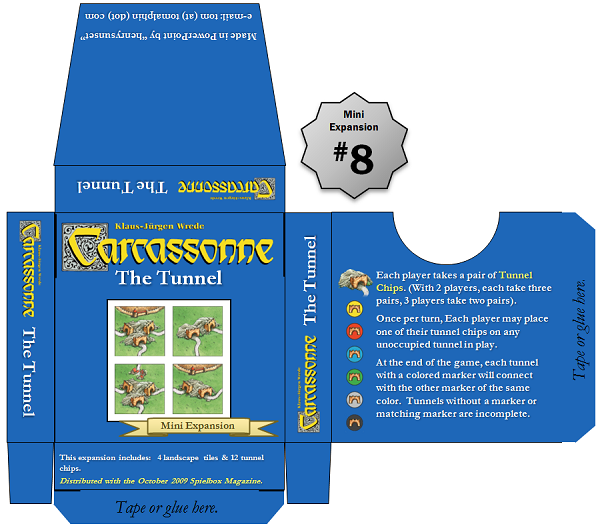 The latest addition to my Carcassonne tuckbox collection for the Tunnel expansion which came out in the fall.
So far, my collection of tuckboxes have been downloaded over 4700 times.  Yesterday, I released an update to the tuckboxes to include the latest expansion, The Tunnel, even though I don’t have a copy yet.  Only time will tell how the Carcassonne franchise will grow, and  if I will be able to keep up with the never-ending expansions!
As always, if you found this interesting or have a question, please leave a comment on my blog or send me an email: tom (at) tomalphin (dot) com