I didn’t really know this until recently, but it turns out Tomatoes come in one of three “Habits”. Those three habits are: determinate, indeterminate, and semi-determinate (less common.) 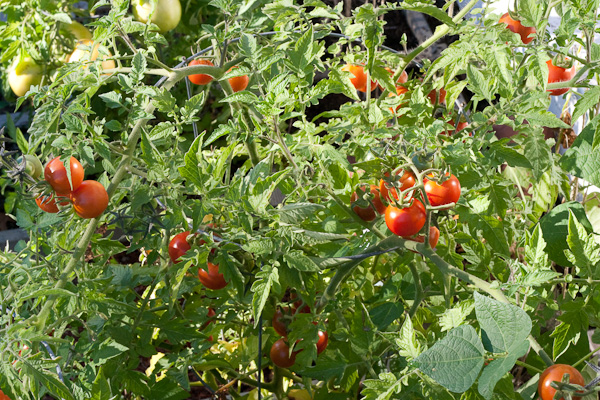 Determinate plants produce all of their fruit pretty much at once, and are generally shorter and bushier than their indeterminate relatives.

Indeterminate plants grow as long as the season will allow, and can reach many feet high with the right conditions. They can be grown in cages, but will overwhelm the cage when they get a particulary good growing season. They can also be grown vertically on a trellis, which will allow them to reach for the sky and receive plenty of light.

I did some research to better understand the habits of my young plants. It turns out all the plants I worked with last year except the Roma Tomatoes are of the Indeterminate variety. This certainly explains why my Roma plants were relatively small and many of the other varieties outgrew their cages.  One new variety for this year, Siberian, is also of the determinate variety.

This year, I plan to build trellises for the four new fully raised beds that aren’t already earmarked for Potato Production. I will probably use one of these to grow additional beans, and the others to grow tomatoes. This is also a good way to begin a crop rotation to minimize pests. I can train some of my indeterminate tomatoes to grow vertically in the back rows of my beds one year, and plant beans in the same location the next year.  Much of this learning and the idea to grow tomatoes on trellises instead of in cages come from a couple great articles on Judy’s Square foot garden blog.

Ofcourse, we may also have to try a Topsy Turvy which grows tomatoes upside down this year.  They are all the rage, and Amy would like to try one for fun.  I’m not one to say no to garening projects and products.  (JK and Ingunn had good luck with their’s last year using extra tomato starts which I grew.)