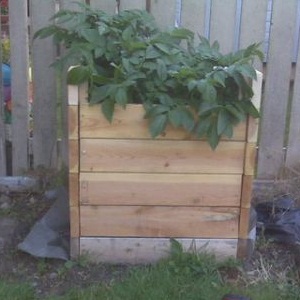 This year, we are trying something new in the garden, POTATOES.   Given that potatoes are cheap and readily available at the store, and they can be easily purchased from a local source year round, Why Potatoes?

So, what’s this about growing potatoes vertically?

It’s rather simple, really.  A potato plant will produce significantly more potatoes in the same Square Foot area if you add soil upwards as the season progresses and the plant grows taller.  Production can go up significantly; there are claims of up to 100 pounds of potatoes in 4 square feet of growing space.  (I suspect that the planty stem of a potato can send out roots when it comes into contact with additional soil, just like tomato plants.  Both potatoes and tomatoes are in the nightshade family.)

We are going to dedicate 16 square feet, and I would be thrilled to see 100 pounds of potatoes in that larger area, that’s just 1/4 of these enthusiastic claims.  (Important note: Early potato varieties set production once for the whole season, so you would only get one thin layer of potatoes underneath a deep pile of dirt.)

We will be dedicating one of our ten square foot gardening beds to this project.  The bed itself is 7″ deep, but I have already built one 7″ riser which will stack on top.  The riser and bed follow my Modular Raised Bed System for Square foot gardening.  I will have to build a few additional risers as the summer progresses, but I may build them with scrap lumber instead of buying fresh cedar decking to save money and resources.  (Since the soil will only be in contact with the wood for a few months, rather than year round, I expect even untreated pine would last several years in this method.)

I will be ordering “Yellow Finn” variety seed potatoes from Seed Savers Exchange.  A 2.5 pound bag of seed potatoes (10$ + S/H) is described as enough for a 25′ row, so I think it will be more than enough for 16 square feet.  I may be able to share if someone is interested.