As you may have noticed, I haven’t been very active on the ol’ blog in the past two months.  It’s not because I am bored or lazy; I’ve been extremely busy!  The main culprits are: work, a fantastic one week trip to Utah, gardening and a little thing called the WAC.

I am enrolled in the Washington Alpine Club’s Basic Climbing Class.  It is an introductory course to mountaineering, starting from the basics.  The class covers snow travel, pooping in the woods, rock climbing, snow camping, ice travel, Self arresting, rescue techniques, Avalanche preparedness, setting up and traveling as a rope team and no doubt much more.  The “final” project for the class will be a summit bid on Mt Baker.

Mt Si: The very first trip was a test.  We were challenged to carry a full pack up Mt. Si in under two hours.  (The pack totaled around 30 pounds of gear as required by the instructors.)  It was weird hiking in a massive group with an artificial deadline, but I made the time without a lot of difficulty.  (It didn’t hurt that I summited Mailbox with a significantly heavier pack the week before in 2.5 hours as practice.)  At the top, we learned some basic skills in three stations: Knots, Emergency Bivy and Map and Compass.  They even had a mini orienteering course for us to practice our compass skills on.  We even had a little snowfall while we were at the top, which was fun.

The main thing I learned that weekend was that I am in pretty good shape, and that I already have a good foundation in the basic skills.  I also learned that you get much colder standing still than moving about.  Standing on a piece of foam can make a difference in keeping your feet warm.

Spire II: The second and third trips were consecutive weekends at Spire Rock near Tacoma.  It is a man-made outdoor climbing area where we practiced climbing, rappelling, ascending a line, orienteering, and more.  (All in mountaineering boots, not rock climbing boots!)   I missed the first weekend in Utah, but they covered pretty much the same material both weekends. 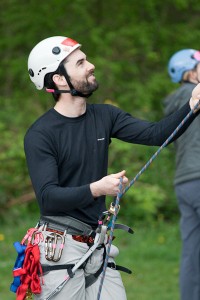 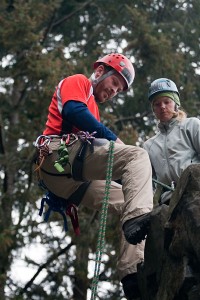 The big learning for me here was that I still don’t enjoy rappelling, particularly with a large pack.  A broad stance helps you keep your footing and prevents you from toppling over.  Finally, prussiking up a vertical line, especially with a pack is a huge pain in the butt.  Not only is it slow, but I found my prussik knots kept getting jammed up and needed to be re-dressed every time I weighted the knot.  I don’t know if more wraps or less would have been better.  I do think a Bachmann knot (around a carabiner) would have been much easier, at least for me.

Mt Erie: The third trip took our skills to real rock, at Mt Erie, near Anacortes.  Here we did more of the same, but on longer pitches of real rock.  This was our first weekend wholly belaying each other, and some of the long belays with a heavy pack were pretty nerve-racking.  I completed several pretty tough routes, at least given that we were still wearing boots. 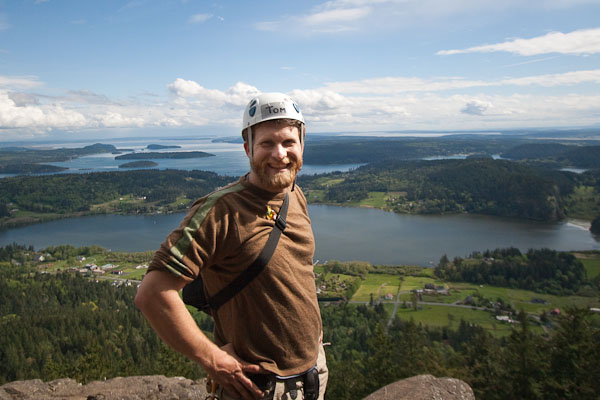 Nice weather arrived at the end of the day.

I learned that rappelling with an autoblock is annoying, but less annoying if you place it on your lower leg loop and as far back as possible.  This allowed me to use more of my leg to slow my descent and is much more comfortable.  I don’t know why I thought the autoblock should go on your waist belt near the ATC, this is clearly not as good.   I also finally got some decent photos on this trip.

Snow I: The most recent trip really galvanized the skills for me.  It was a weekend of Snow Camping, Self Arresting, Building and testing various Snow Anchoring techniques, Snow Travel, further practice on a Rope Team,  and given the unseasonably large amount of snow we received (all day, both days) we got a LOT of extra experience testing the waterproofness of our gear and practicing snow travel in fresh deep snow.  The final celebration on the first day was a cooking contest where each team competed to create the tastiest and most thematically strong dinner.  Not wanting to miss out on the competition, the Instructors surprised us with fantastic appetizers too.  The winning teams prepared Indian Food and Jamaican Food (complete with rasta dread-headed costumes.) 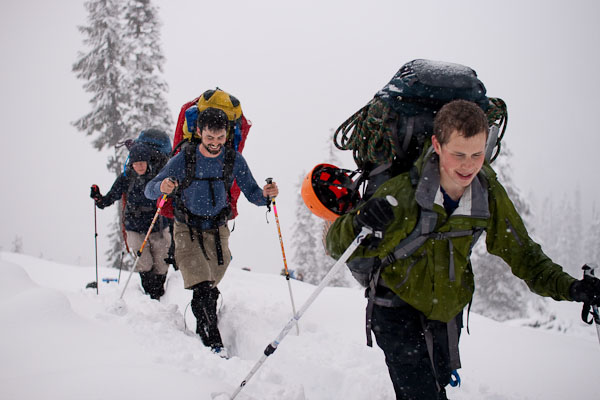 The Ascent to our snow camping area near the top of Alpental Chair 2.

I can’t begin to list everything I learned this weekend, but the biggies are threefold:

1) My gloves were not adequately waterproof, and you need an excellent glove system when you need to get your hands out to do things frequently in a wet environment.  The right gear and knowing how to use it is crucial.

2) I am horribly bad at following or kicking steps in very soft fresh snow.  I know I am pretty heavy, especially for my small size 9.5 feet, but this was maddeningly hard for me.  The learning is that keeping your weight on the toes and stepping up gently without the forceful push-off on the lower foot is crucial.  I haven’t got it down quite yet, but I know what I need to work on.  I even went to the gym and practiced stepping gently on the stair machine to get ready for the alpine climbs.

3) Ice Axe arrest is not something you want to need to use.  It works, sometimes, in certain snow conditions, but it is tricky to do well, especially when you start off sliding down hill head first on your back.  I don’t think this is completely a programmed response yet, but with the two days of practice I am getting there. 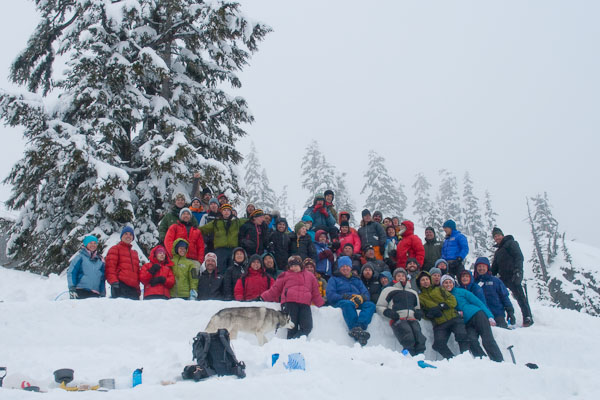 Group Photo at the Snow Kitchen we made during  Snow 1.

4) I nearly forgot, but I also learned that Photography in wet snowy conditions, particularly right around the freezing point is very difficult.  Everything gets wet, which isn’t great for the camera gear, but more troubling, the lens fogs up completely.  With nothing dry on my body, I couldn’t wipe the condensation free.  Further, I found the bulk of an SLR really is a burden when traveling on snow.  I’m not sure I can imagine carrying an SLR on all of the alpine trips, and may seriously consider a different camera for those trips.

So far, the class has been great and I look forward to the alpine climbs.  It’s a little hard to believe that the class is more than half complete, but I have learned a lot.  I certainly look forward to learning more through the class itself, and subsequent trips with my new friends in the Washington Alpine Club.