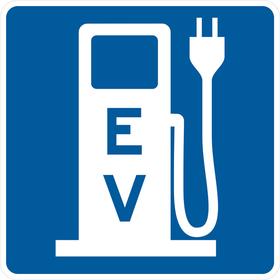 After much discussion, consideration and research, we made the decision to purchase an all-electric car. (We test-drove both the Nissan Leaf and Chevy Volt back in 2010.) This purchase was made with full understanding of the pricing, the 7500$ Federal rebate, the sales tax exception for electric cars in WA State, and awareness of the limited range of about 70 miles between charges.

The car we purchased was the 2013 Nissan Leaf ‘S’ model. This is a newly-introduced model with a few less bells and whistles than last years car (ex: no navigation system), but a much more palatable MSRP of 28,800$. After factoring in the 7,500$ Federal Tax Credit, no sales tax (for electric cars) in Washington State and by negotiating the price, the car costs less than 20,000$. (The tax savings make it comparable to a gas-powered car costing 18,000$.) 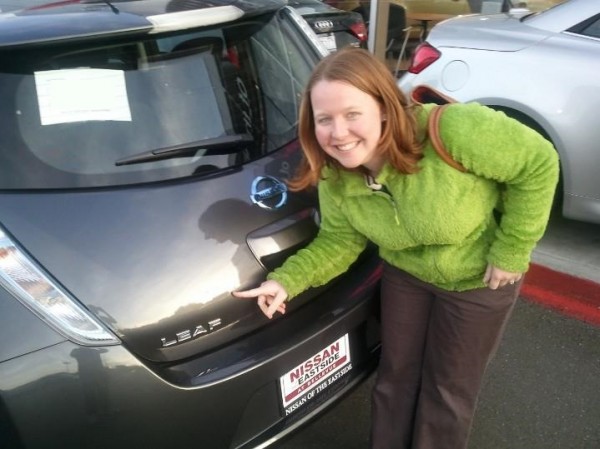 For the price, you are still getting some higher-end features including keyless entry and start – if the key is in your pocket, that’s good enough to turn on the car. Even without the higher-end navigation features, the ‘S’ model has AM/FM/XM Radio, a perfectly reasonable sound system and Bluetooth hands-free for making phone calls. Besides, most people have a cell phone with navigation capabilities, and this isn’t a car you are likely to take far from home. At the lowest price, you are foregoing the ability to charge the car twice as fast (6.6kW/hr) when plugged-in to a 240v “level 2” charger or even faster using a “Level 3” charger, but this is available as a 1300$ upgrade if you need this ability.

Since we rarely drive more than 30 miles in a single day of commuting, we planned to simply charge the car at home with the slower 120v charger which is included with the car.

Even if your electric car purchase is well researched, an electric car is a paradigm shift and it takes some adjustment. Even in the Pacific Northwest, electric cars are uncommon, and you will experience the growing pains of a new industry.

1: Comparing the cost per mile to Gasoline

One of the key selling points of an electric car like the Leaf is the potential savings when it comes to cost per mile. It is pretty easy to compare the cost to drive a mile with an electric car and a gas-powered car. (In these calculations, I am excluding other costs of ownership such as oil changes and regular servicing which should be less for an electric car.)

Nissan Leaf
The Leaf gets about 3 miles per kWH. At a cost of 8 to 9 cents per kWH in Seattle, the cost per mile is 3 cents.

Honda Civic
While the Honda Fit may seem like a better comparison to the Leaf, I’m being generous and looking at the Civic which gets a little more MPG. With 32mpg and an average price of 3.5$/gallon (It’s currently 3.75$), the cost per mile is 11 cents.

Toyota Prius C
The Prius C is their new entry-level hybrid car, and is almost exactly the same cost as the Leaf after you account for the federal credit and no sales tax. It is smaller than the Leaf and not as nice. That said, it’s the lowest priced car which gets 50mpg. At 50mpg, the cost per mile is 7 cents, still more than twice that of the Leaf.

I also considered the Plug-in Prius and some other electric car options, but they were less cost effective and less appealing.

As you can see, the Leaf made the most sense for us based on our needs and a detailed cost analysis.

In practical terms, a Leaf can drive about 3 miles for every kWH of power stored in the 24kWh battery, for a total range of a little over 70 miles. In other words, it is much faster to deplete the battery than to charge it! 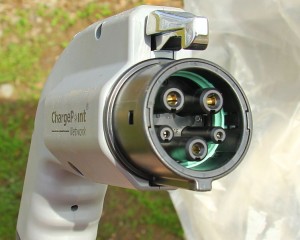 Level 1 Charging is what you get when you plug an electric car into a standard 120V electrical outlet. This will recharge your car by 1kW per hour. (In practical terms you can drive 3 miles for every hour it is plugged in.)

Level 1 chargers are limited by standard household wiring and circuits which are generally rated for 15A, which would allow a theoretical 1.8kW of charging. (Watts = Amps * Volts, therefore 15A * 120V = 1800W.) In practice, a car plugged in to a Level 1 charger should expect to recharge about 1kW per hour since these chargers generally only utilize 10A. (There may be other outlets in the circuit which are in use.)

Level 2 Charging is much faster allowing you to charge your car at a rate of up to 6.6kW/hr, Our car is limited to 3.3hW/hr, which in practice means about 10 miles of driving for each hour of charging.

Level 2 Chargers rely on the same 240V electrical output which is used by large appliances such as dryers and ovens. Most level 2 chargers allow cars to charge at up to 6.6kW/h, which is made possible by the use of a 30A 240V circuit. (This has a theoretical output of 7200W based on the same equation. Some homes are actually wired as 110V/220V, which would have an theoretical limit of 6600W on a 30A circuit.)

After only a couple days with the car, we are considering a level 2 charger at our house. There is a 30% federal credit to buy and install a charger, which should put the cost under 1000$.

Living in the Pacific Northwest, you have probably seen special parking spots for electric cars at the store or at the mall. One might naively assume that these charging stations are free to use as an incentive to shopping at that location, and in some cases you would be right, and in other cases you would be badly mistaken.

As it turns out, the vast majority of public charging stations have been built with the ability to charge based on a fixed rate for each hour or for each kW of charging. Unfortunately for electric car owners, very few of these stations simply take a credit card like a gas station. Instead, you must become a member of their particular “charging network” in order to recharge your car. (ex: Imagine if each gas station required a special credit card that only works at their gas stations. If you desperately needed gas and the nearest station was of the wrong type, you would be unable to fill up your car.)

Thankfully, in the Seattle area there are only two major networks which cover the majority of charging locations. If you want the flexibility to use these stations due to unexpected changes to your driving plans, you will need to create an account with both networks and carry multiple RFID cards to use any charging station you might encouter.

With a gasoline-powered car, you have the luxury of only looking at the gas gauge every once in a while. By contrast, you need to pay close attention to the battery level and projected range in an electric car. This can cause some drivers to develop range anxiety.

In our limited experience, it seems like the easiest way to manage the limited range is to consider your whole trip before you leave the house. In our case, I have a 6 mile (each way) commute and my wife has a 11 mile commute (each way). Since either commute is well under 25 miles total, we have 40+ miles of wiggle room to add a trip to the gym, to the store, or other unexpected destinations. In the rare instance where we need to exceed that range in a single day, we would leverage one of the many free or paid charging options called out earlier. We own two cars, so we can always switch cars if we need to drive further than that in a day.

I plan to offer more details of our experience living with an electric car sometime soon. If you have any comments or questions, leave a message below!

ADDENDUM 3/7/2013: I have received some clarifying information on both the circuitry required to install a Level 2 Charger (it should be a 40A circuit) and the energy loss associated with charging a battery which needs to be factored into costs and calculations. I plan to update this post later to clarify a few of these details.