This month, we got the opportunity to test two of the front-runners of the race to build and sell a mainstream plug-in electric vehicle.  Both cars were designed  with different tradeoffs in mind, and each is being brought to market with a different strategy.  What follows isn’t a formal review, but my take on the cars based on very limited experiences with each vehicle. 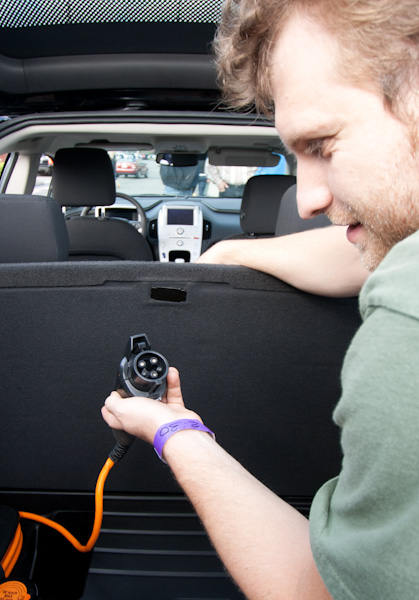 The first car we tried was the Chevy Volt, an expensive (40,280$ – 7,500$ federal credit = 32,780$) 4-seater designed around a smaller battery back with a 40 mile range and a gas generator to extend the range several hundred miles.  It has a jellybean-shaped exterior which is very similar to the Prius and a spaceship interior with tons of bells and whistles that remind you at all opportunities that you are driving a “green” car. 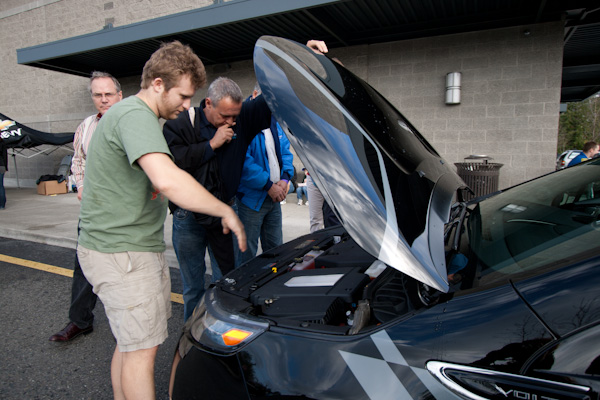 Getting under the hood of the Chevy Volt

Today we participated in a test drive of the Nissan Leaf.  It is priced starting at a more reasonable 25,280$ (32,780$ before the 7,500$ federal credit).  It’s exterior is more “budget hatchback” than “Prius ripoff” but it still features the vertical column of clear plastic  on either side of the rear door which has grown to mean green.  The interior is more modestly appointed, with an interior that I found more familiar and much less distracting. 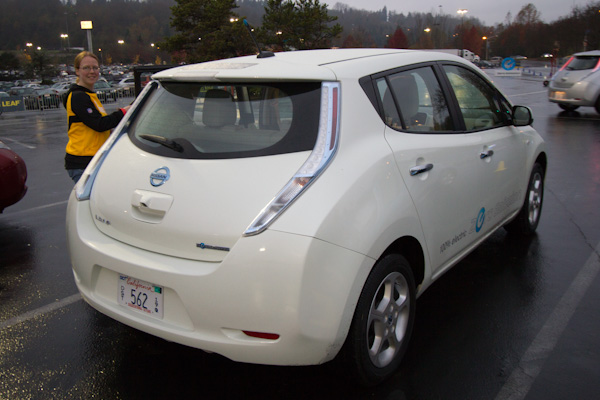 The Leaf is a basic-looking small car

The Leaf is the obvious winner as it is 7500$ cheaper. It also may be cheaper to maintain as it has no combustion engine and needs no oil changes.  The Leaf relies more on a high-voltage charging station in the home as it takes 20 hours to charge fully on 110 volt, versus 8 hours with the special charger.  With the smaller battery, the Volt doesn’t take as long to charge fully.

That said, it is impossible to predict the maintenance costs of a new technology.  (Both have comparable warranties on the battery system at around 8 years or 100k miles, which is good to know, but I expect more than 8 years of a car so only time will tell.)  On the pricing front, I understand but haven’t confirmed that these cars are exempt from state sales tax, which brings the effective cost of the car as compared to a traditional gasoline car down by another 2-3 thousand dollars.

At it’s core, the Chevy Volt is a hybrid car like the Prius, with a slightly larger battery pack and the ability to plug it in to the wall.  It was presented cautiously, as a car with no weaknesses and the ability to drive 40 miles a day without using any gas.  They felt defensive about this design decision, and didn’t miss an opportunity to remind us that pure electric vehicles have a limited range.

The Leaf was designed from the ground up to be an all-electric vehicle for everyday use.  It was presented in today’s demonstration in a direct an unapologetic fashion.  They explained that most people can drive around town all day with a range of 100 miles, and if that isn’t enough, rapid charging stations are getting built on highways and at the places you shop.  I felt like the clarity of purpose made for a stronger position.

Apart from the different power systems, each car took a different approach to the interior and overall driving experience.

I’ll say it up front rather than dancing around the matter: I hated the interior of the Volt.  It felt like a spaceship with a shiny white plastic center console with a massive touchscreen dominated with excessively “green” icons and menus.  Despite the shiny veneer, the buttons felt cheap with an incredibly annoying interaction design: The physical buttons which surround the touchscreen respond to touch, not clicking.  As such you cannot feel your way around the dash to change the station, since merely touching the button will change the station.  It was all made worse by the fact that I expect a car with a final cost of over 30k to have a refined, polished and professional build quality, like that in a BMW or other expensive cars.  Lastly, the placement of the battery in a column down the middle of the car means that it is strictly a 4-seater.  It’s not that it would be comfortable to carry 5 in either car, but the flexibility is nice. 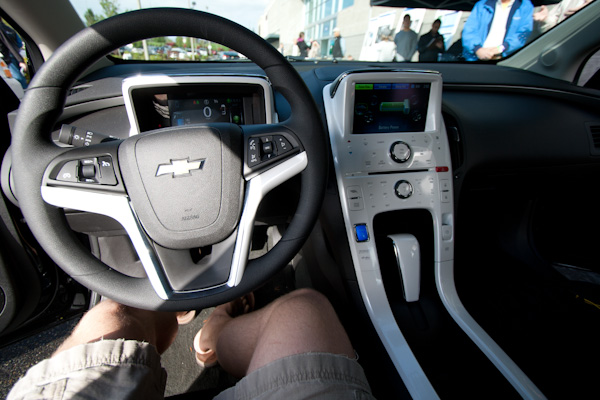 The interior of the Volt was distracting and felt cheap

By contrast, the Leaf’s interior did little to impress or offend me.  As a driver of a 12-year old car that has a fairly spartan interior, I am used to a car with fairly basic controls and displays.  The dashboard was straightforward with the expected battery gauges, speedometer and a nicely understated indicator of your driving efficiency.  The plastic interior detailing felt solid, though lacking in the aesthetic appeal of polished plastic, metal or wood.  The included navigation system and touchscreen was straightforward and responsive.  It will no doubt feel dated in 10 years, but hopefully by then you won’t need a special map to find a place to plug in your car.  Overall, as a car driver and not a car nut, the interior features aligned with my expectations of a car in this price range and appealed to my preference for function before form and features. 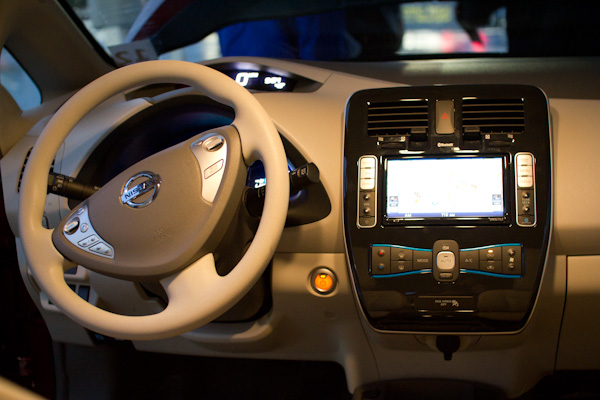 The Leaf has a clean and simple interior with less distractions

Chevy is trying very hard to market the Volt as a Plug-in electric vehicle with no limits, but it felt like they wanted it to be everything to everyone and ended up building a car that isn’t great at anything and costs too much.  By contrast, the Leaf is marketed as a convenient 100% electric car for getting around town without a lot of fuss.

I think Nissan is right.  We all know what makes an electric car great: cost savings and lessened environmental impact.  That’s why they focused their energy on two things: Making a great car that feels like a car first, and explaining how you can fit it’s need to be plugged-in every 100 miles in to your existing lifestyle.