A Gaggle of Geese, a Tangle of Technology…

I love to travel, and I get a lot of pleasure out of having the right tools to enjoy my trip, and to document the trip in a variety of ways.  This Christmas, we went to New Zealand, and we wanted to bring our cameras, a phone, mp3 player, Netbook, and a GPS, but we ended up with a heavy tangled mess of adapters, wires, chargers and batteries.  I stuffed it all in a mesh bag to make sure I didn’t lose anything.

What went wrong in the Electronics industry to leave me in this situation, what can I do better next time, and will this ever get any better in the future? 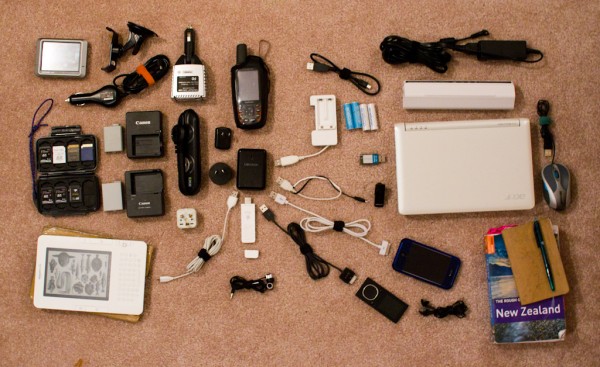 The devices, accessories, chargers, cables and adapters we brought on our trip. (cameras & lenses excluded.)

Part of my problem is that each of the technology items I travel with are excellent at a single thing, so I end up carrying many single-use items like a dedicated GPS or a standalone MP3 Player.  What follows is a breakdown of the items I brought with me on our two-week holiday trip to New Zealand, and an assessment of  how everything worked out and how I might do it better next time.

Cameras: This  includes the cameras themselves, and a small collection of lenses we share between two cameras.  For this trip, we brought 4 lenses for our Canon Cameras: Canon EF-S 10-22mm F3.5-5.6 Wide Angle Zoom Lens, Sigma EF 30mm F1.4 Midrange Prime Lens, Canon EF 100mm F2.8 Prime Macro Lens, Canon EF 70-200mm F4L Telephoto Zoom Lens.  (The majority of our photos were taken with the 30mm Prime which is excellent and sharp, and the 10-22mm Wide which continues to be soft and disappointing.)

Beyond the Cameras and Lenses, we brought enough memory cards such that we did not need to download and reuse them on the trip.  (A total of 128gb in SD Cards of capacities ranging from 4-32gb stored in a sturdy Pelican case).  This was more than enough storage, especially due to poor weather which limited our shooting.  We also brought a spare battery for both cameras, and the charger for each camera since they are slightly different.  We also carried a lens cleaning pen, and a Mini USB cable to download photos at night.

Geotagging: Beyond the photos themselves, I enjoy GeoTagging almost all of my photos.  This associates an exact location with each photo, allowing you to see where each photo was taken on a map.  Since very few cameras actually include a GPS unit, the main way to do this is to carry a handheld GPS unit wherever you go which records your location every few seconds as digital breadcrumbs, called a Tracklog.  Later, a software program on the computer can compare the timestamp of each photo you took that day to the Tracklog to determine exactly where the photo was taken.  This works best with a high-precision GPS that has excellent battery life.  In my case, I use the Garmin GPSMAP 62s, which is extremely accurate, reasonably lightweight and also has the ability to show detailed topographic maps of your current location.  I made sure to download the high resolution Topo Maps for all of New Zealand before we left home, which prevented us from having to buy costly maps in preparation for our hikes.

Ofcourse, another device means additional accessories.  The Garmin GPS uses standard AA Batteries, which would be great, except I needed two batteries per day.  To achieve this knowing that we wouldn’t be able to charge them every night, I needed 6 batteries in total and a compact charger.  I use the excellent Sanyo Eneloop rechargeables to save money and I found an Eneloop-branded charger on Amazon that charges two batteries in 6 hours from a USB port.

Auto GPS: Beyond the Handheld GPS which recorded tracklogs and went with us on hikes and walking around town, we brought a dedicated Automotive GPS with “Routable” maps of New Zealand.  We learned travelling in the UK and Ireland that a GPS can save incredible amounts of time and frustration fiddling with maps and trying to keep track of where you are and where you are going.  We continue to use a 3 year old model, the Garmin Nuvi 200 because it still works fine and accepts current maps for all over the world.

It includes a suction cup mount to attach it to the window and as expected, it requires a proprietary car charger that plugs into a serial port.  It is particularly bulky, and frustrating as the device uses a USB port, but refuses to charge with anything other than the special charger.

Phone & Entertainment: Another set of gear came with us to help pass the time and serve other roles.  We each brought an MP3 player to help with the long flights and provide variety while driving.  I brought my unlocked iPhone so we could buy a SIM card if we liked to make reasonably priced calls.  Amy also brought her Kindle, as it is much more compact than the stack of paperbacks she used to travel with.

All four of these devices charge off of a USB Port, but all but the vintage iPod Shuffle  have proprietary connectors.  (The iPhone and Zune are inexcusable, but the Kindle should be commended for using the standard Micro USB cable.)

Laptop: To back-up our photos, entertain me on the flight, and watch a couple movies, we brought an Acer netbook computer which is extremely small, and I was able to upgrade it’s hard drive to a whopping 500gb.  I put 100’s of movies on the computer before leaving home including a couple of Christmas movies.  Even with it’s modest Atom CPU, it was able to play standard definition movies, browse the web or using Google Voice to call our families.  Backing up photos was a little sluggish as Adobe Lightroom does not do well on slower machines, and tagging/reviewing photos was almost unbearable.  A couple times I tried to develop a photo, but this was too slow to recommend.

The laptop was one of the worst offenders in terms of bulky accessories.  The Power Adapter is very large with an unnecessarily long cord, the extended battery gave us 8 hours of battery life but is very bulky and heavy, the mouse is nice to have but additional bulk, since it lacks integrated bluetooth we had a USB Bluetooth adapter, plus a Bluetooth headset and charger to make phone calls.

There are a variety of problems at play here.  As noted, most small consumer electronics have settled on USB to charge, but at this point, each one uses a different cable to connect on the device end:  Kindle uses a MicroUSB connection, iPhone and Zune use a proprietary connectors, my old iPod Shuffle uses the larger standard USB connection.  The proprietary connectors are caused by the manufacturer’s desire to sell accessories that would not be practical with only the 4 wires contained in a USB Cable.  Accessories and replacement cables are likely profitable!  (Even the tiny bluetooth headset charges from the same 5V that the rest of these devices use, although it was sold with a bulky wall adapter which I cut off and soldered to a standard USB Plug.  That’s for a later article.)

As for the Cameras, Laptop and Handheld GPS, each has their own story.

It actually makes sense that the Laptop charger is reasonably large.  It likely has a large AC/DC converter, and this creates heat which needs to be dissipated.  As this laptop is an inexpensive netbook, they sure aren’t motivated to use the smallest or most efficient components, and I’m sure the unnecessarily long cable was inexpensive, and less customers are likely to complain with a cord that is too long than too short.  All that I ask is that they use a shorter cable from the wall to the adapter, since this is the heavier and thicker section of cord, or put the plug right on the adapter itself.

Why two cameras from the same manufacturer need a different battery is excusable.  My camera added video recording feature which can use a lot of power so they used a larger battery.  That said, there is no reason they couldn’t make a taller battery for my camera which uses the same connection to the charger as her older battery.  One less charger would be a tremendous savings.  Further, I would accept a slow charge over a USB connection.  Since both cameras include a USB port, they should offer the ability to trickle-charge the battery overnight when plugged in.  This woudl allow me to leave both chargers at home.  (I suspect this is not offered due to concerns of overheating the battery, a charging battery leaking inside the camera, or the few additional components they would need to put in the camera to make it work.)

The Handheld GPS is the most forgivable of the bunch.  It relies on standard AA batteries.  A built-in battery would be a mistake since you cannot replace it while on the trail, and proprietary batteries would be more expensive for customers and would likely still require a separate charger.  Again, I think it would be a great feature to allow slow-charging of the AA Batteries when connected to a powered USB source, but this is a little less expected of a niche product than a mainstream product like a camera.

In the long term, we may see the situation improve as the European Union has pressured phone manufacturers to standardize on MicroUSB chargers. (right in the image below)  I suspect that this will continue beyond phones to influence all consumer electronics devices (Mp3 players, bluetooth headsets, GPS devices, E-readers) as economies of scale should make it the cheapest charger on the market, or device manufacturers may decide that they don’t need to include a charger if customers already own one.  I can’t wait for the day where a single cable can sync and charge all of my devices!

If I can’t have a single cable which works for everything, a smaller step manufacturers can take quickly is to include shorter cables with their devices.  Most customers would be happy with a 12″ cable, and I actually got a cable of this length with a recent portable hard drive purchase. I would love to have even shorter 3″ cables for each device, but anything shorter than 2 meters is an improvement!

While I wait for more devices to follow the same standards, I have called out a few changes I can make next time:

Overall, I am happy with the equipment we brought and the optimizations we made before we left home.  That said, this was a timely opportunity to review what worked well, what didn’t, what we used a lot and what we could have left at home.