I also love the LEGO Architecture Studio set, which contains tons of white and clear bricks for building your own creations, and you may have seen the 30 LEGO Architecture challenges which I encourage you to see and try at home. That’s why I was really excited when I heard that an official LEGO Architecture book was coming out.

“LEGO Architecture: The Visual Guide” is a beautiful, heavy, hardcover book which covers all 21 LEGO Architecture sets which have been released so far in 234 glossy pages. It’s a premium book by regular LEGO book publisher DK, and it comes in a substantial slipcover. It’s clearly marketed at adults, and it’s probably meant as a coffee table book. A premium book comes with a premium pricetag: the MSRP is 40$ (US), but it is available on Amazon for less than 30$. 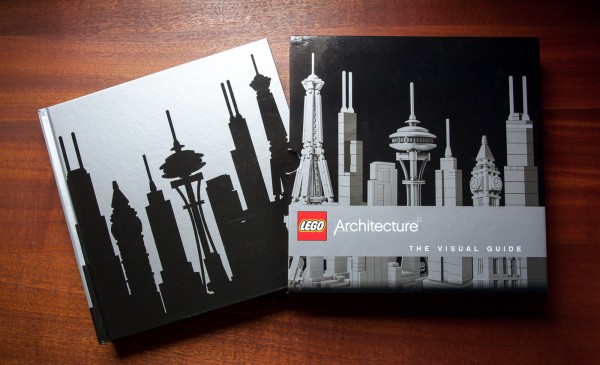 The book starts with a couple pages of intro, then a short profile of Adam Reed Tucker, who is the lead designer for the LEGO Architecture series, followed by short profiles for the other 4 designers who have contributed one or more models to the series.

The book aims to explore each model in the series “in depth”. I’ve used the Fallingwater chapter as an example, largely due to the fact that publisher has already provided samples of most of the pages on their website. 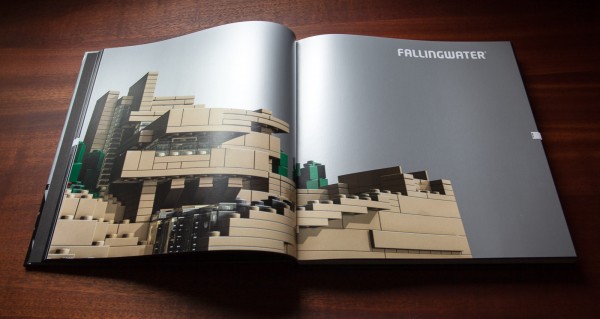 The book adheres to a very regular pattern for each chapter. Each chapter begins with a title page spread contains the name of each model and a close-up photo. (While attractively designed, these feel like a waste of 42 pages.) 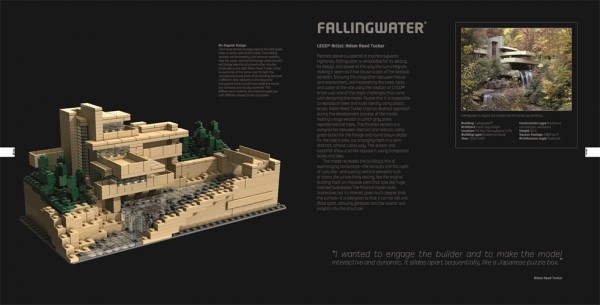 The next spread shows a detailed photo of the finished model. A couple paragraphs of text talk a little about the original building, and how it was adapted into the LEGO model. 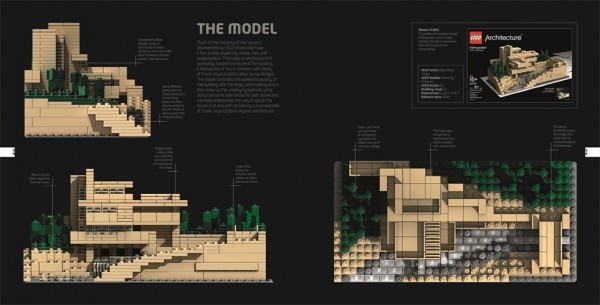 This is followed by images of “the model” from several angles. Interesting architectural details are highlighted and described with short caption text. 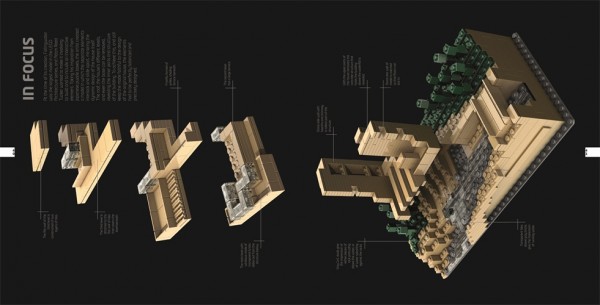 The fourth spread is a beautifully executed exploded “in focus” view of the model. They did a fantastic job of showing how even the most complex models come together. This works particularly well for the Fallingwater set as it really is built out of intentional “modules”, but it works really well for most of the other models as well. I don’t love that many of these spreads are sideways, but understand why they made that decision.

Unfortunately, only about half of the models include an exploded view. Many of the larger and more complex models were not included: Villa Savoye, UN Headquarters, Sydney Opera House and others. 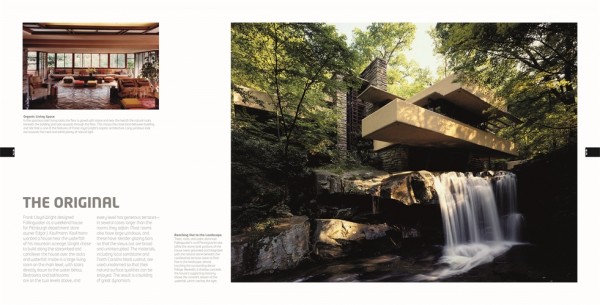 The final spread is a cursory look at “the original” building. Unfortunately, it includes much less detail than the instruction manual which is included with each set.

I already noted that the book is beautifully printed. I don’t understand why it needs a slipcover, but it is thick and of good quality as well. Unfortunately, the book doesn’t have a real cover once removed from the slipcover, which is too bad as i’d like to put the slipcover in the closet. In spending more time with the book, I’m pretty sure that the majority of the images in the book are actually 3D computer renderings. They are of the absolute highest quality, and exceed anything they likely could have achieved with photos. They did make some bad typographic choices, however. The font face they used is thin, blocky and hard to read, and this is made worse by the decision to use white text on a black background, or very light grey text on a white background. 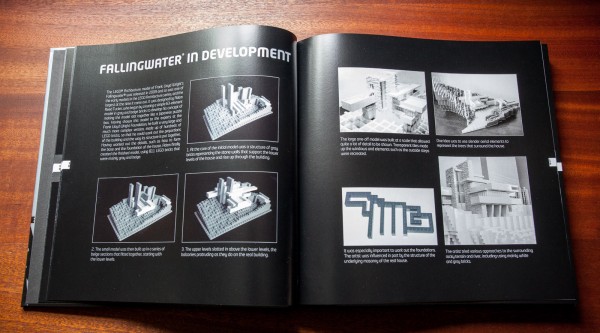 I would have liked to see more descriptions like this about the design process behind each model.

I would have liked to see much more information in this book about the creative process which Adam and the other LEGO artists used to recreate these iconic buildings using a relatively small number of bricks. There four pages near the beginning talking about the design process behind the the Guggenheim and Fallingwater models, including a few photos of the early prototypes. I just wish there was much, much more of this type of info.

Who is this book for?

The book was created with high production quality and it features beautifully rendered images of the various models. I loved the “in focus” views, but sadly these weren’t included for every model.

I really wanted this book would go deeper than the information already included in the instruction manual for each LEGO set. Unfortunately, it doesn’t bring any very much new information to the table. To be completely honest, it feels like a really detailed product catalog. The high price, awkward slipcover and poor typography don’t help. That said, I have a good use for this book. I have the complete collection of LEGO architecture models on display in my office at work, so this coffee-table style book will sit in my office for guests to thumb through and learn a little more about the models they are seeing.