I arrived at Burning Man with CJ, my best friend from college on Tuesday night. He had never been, and I had only been once before, 9 years ago. I knew that attendance has doubled since my last visit (now 68,000 attendees), but I wasn’t prepared for the massive increase in scale of the event. Everything seemed bigger – the camp itself, the music stages, the art installations and the fire breathing art cars. We quickly found our friends who arrived a day earlier at 4:15 and J Street, assembled our bikes, and began to explore the event. 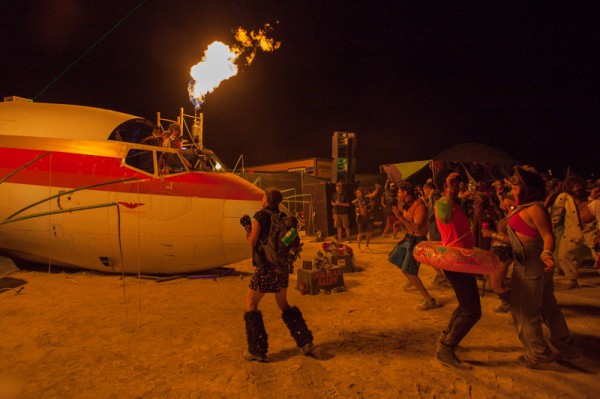 One of many stages of live music and fire.

The next day, I was biking around one of the outer rings by myself and saw a tent filled with clothes and accessories labeled “thrift shop” or similar. The selection was pretty picked over, just a few feather boas, sparkly shirts and neon remnants remaining, but there were a couple brand new Tyvek suits on one end of the rack. I wasn’t immediately sure why I wanted one, but I thought it might be fun to have a white costume as a blank slate, so I took off my t-shirt and put it on. Maybe I’d run around and let people sign the suit with a Sharpie wherever I went?

When I got to camp, I was sweatier and damper than I hoped – Tyvek allows water vapor to breathe, albeit not very quickly – the plasticy material had stuck to my skin. Inspiration struck! If I could blow the suit up with a fan, it would keep the fabric off my skin and I’d look like a giant stay-puffed marshmallow man and/or astronaut. I did a quick test with the battery-powered fan I purchased to keep my tent cool, and it really did inflate the costume pretty well.

In a brief flurry of gaffing Tape, cordless drills and zipties, the fan was attached to the middle of my back, switched on, and in seconds I transformed into a spaceman. Laughter from my camp surrounded me, so I knew I was onto something. A few brief modifications involving some 1/4″ plastic tubing, the botton 2 inches of a one gallon water jug, more zip ties and a dirty t-shirt increased the efficacy of the fan and the comfort against my back. Major Tom was born, and I was off… 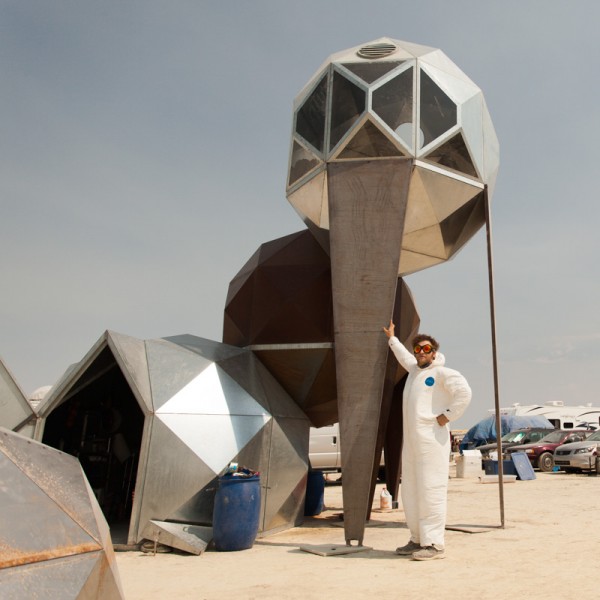 Major Tom explored the playa a few times, initially visiting Center Camp, leveraging the humorous nature of the costume to help people smile and allowing me to capture some good portraits. Further iterations of the spaceman costume involved a metallized bubble wrap solar radiation cover for my camera and a NASA logo on the suit.

The next exploration as a Spaceman grew bolder – I embraced the event’s spirit of art and weirdness by fully taking on the persona of the spaceman. I addressed people I encountered with “greetings burners” instead of a simple hello. After an hour of exploring camp, including a visit to a very cool camp which featured spacey looking domes made of shaped sheet metal, I made my way to the temple. I walked through the temple with respect, softening the act to respect those who were sincerely celebrating, worshiping, meditating and reflecting within the temple walls.

As I left the temple, people wanted to capture photos of my spaceman costume, and I captured their photos as well. The act came back as I walked further from the temple to the masses of bikes parked around the perimeter and encountered some more people. 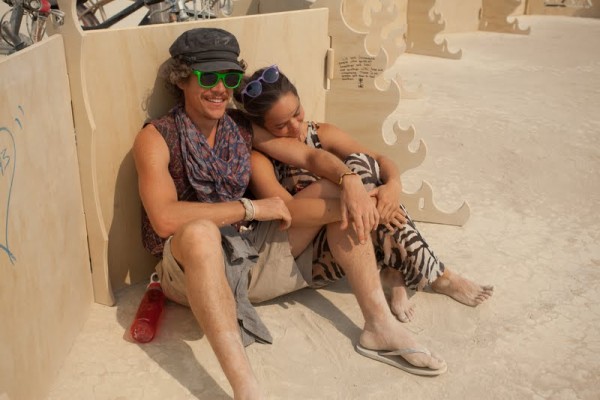 Fellow burners relaxing at the Temple.

“Greetings burners, I come from Earth to unlock the secrets of the playa.”

In response, a lavishly dressed older women, clearly a veteran burner responded simply: “I know the secret of the playa, come with me.” I followed her to her bike, where she silently rummaged in her bike bag and pulled out a sticker which she handed to me with no fanfare. The sticker read simply: “Fuck you, It’s Magic”.

The bluntness of the message magnified the truth. I laughed a bit, trying to maintain my spaceman composure, but failed miserably. It was easier to break character, laugh out loud, give her a hug and a sincere thank you and continue my explorations. It really was the perfect response. Trying to wrap your head around an event as big and strange as Burning Man is hard enough. I guess it is a big party, a chance for freaks and geeks to show off, a counterculture movement, and a big dusty mess of a camping trip all at once. 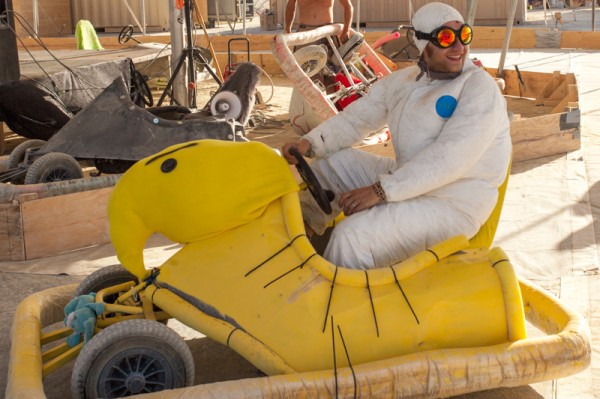 Trying to explain it to people in the “default world” is harder still. On our way out of camp, after waiting in line a couple hours at the exit, we stopped at one of the Indian Taco stands for some tasty food. A fellow burner had a different description of the event: It’s a giant potluck, except instead of bringing one dish to share, people bring an entire city, food, drinks, music, art installations, art cars, and a healthy serving of sincerity and kindness to share with everyone. But somehow, even that misses the point – maybe it is magic.

Burning Man is an annual celebration of music, arts and community held in the remote and inhospitable Black Rock Desert, 3 hours northeast of Reno, Nevada.