From buckets to bins: How to sort a lot of Lego

This article is the third in a series about buying and selling used LEGO.

In my previous article, I looked at strategies to get a good deal buying bulk unsorted Lego. Hopefully there are some complete sets buried in the buckets you bought, but before we can start sorting the bricks into their respective sets, we will need to sort them to see what we’ve got.

This article assumes that the bricks you purchased are largely unsorted and disassembled. Bricks that are snapped together should be disassembled during the sorting process, unless it looks like part of an official Lego model which you should set aside for now. (A kid’s half-assembled “MOC” or My Own Creation isn’t going to help you determine which sets you have.) I will go into the process of sorting bricks into specific sets in my next article.

Before you start sorting, take a few minutes to consider how your sorting goals. This will depend on your philosophy, the containers you will use to hold the sorted bricks, and the number of bricks you need to sort. For example, you might choose to sort a small collection of bricks by color alone, but you might want to sort a large collection so precisely that every different color of every different part has a separate container.

When I started sorting, I thought that I would sort by rough type and color. For example, put all the 2×2, 2×3, 2×4, 2×6 bricks of the same color in one bag. Once I started sorting the bricks into specific sets I realized that it is better to sort by brick type than color, since it is a lot easier to find a red 2×2 brick in a large container of 2×2’s than finding a 2×2 in a large container of miscellaneous red bricks.

If you are sorting a lot of bricks, sort by brick type first. You only need to sort by color if you have too many bricks to fit them all in a single container.

An “Algorithm” is a computer science term for a repeatable process to solve a problem. In our case, the problem is sorting a ton of Lego, and we want an efficient system for getting it done. If you need to sort a lot of Lego, it will be impractical to sort everything into their final storage location in a single step. That’s why I chose a two-pass system which first quickly sorts the bricks by general part type, then I can sort them more precisely later.

Since I purchased the bricks on Christmas vacation, I had lots of time to begin the sorting process away from home. (It was football season and I don’t care that much for the sport.) As such, I did a lot of my sorting into 1 gallon Ziploc bags which I could purchase inexpensively from the Grocery store. Large plastic bins would be easier if I had them available.

I found that the fastest way to sort was to grab a couple handfuls of bricks, spread them out on the floor. I then grabbed all the pieces that I could see of a given type, then moved on to the next type. I usually started with large common parts like the 2x and 1x bricks; this thinned the pile making it easier to find the smaller pieces that remained. (I didn’t worry too much about making sorting mistakes, since I would discover incorrectly sorted pieces in the second phase.) 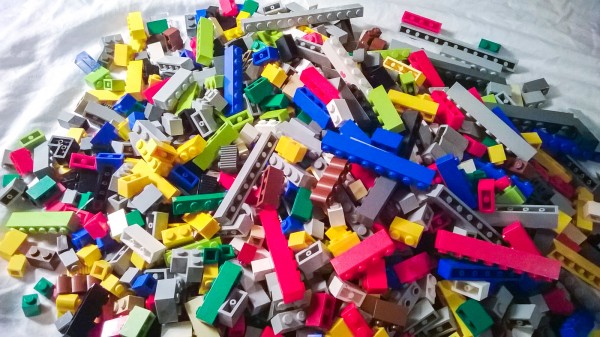 The goal of the first sort is to set aside all the similar parts like this.

When the initial sort was complete, I ended up with about 30 gallon-sized bags full of bricks. I had only a single small bag of Jumpers and Cheese, and but I had many one-gallon bags of 1×1 Bricks, 1×2 Bricks, Technics and Bionicle.

Precise sort:
After completing the quick sort, I took one large bag at time and sorted the parts into smaller containers. In most cases I sorted each brick into a bag containing only a single part type, although uncommon parts would go into a bag of miscellaneous less common parts. (ex: “Other” clips.) 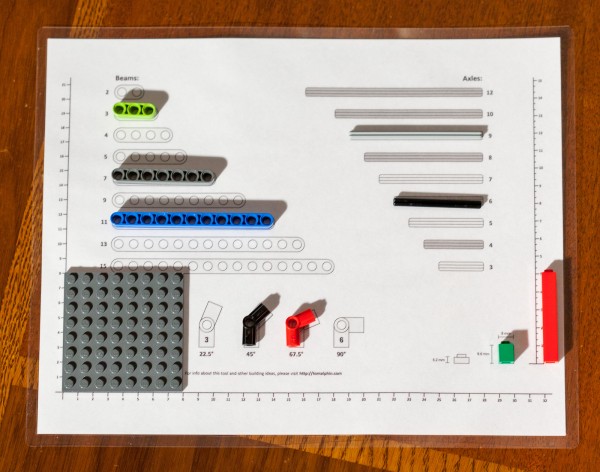 Using the Lego Ruler and Sorting guide to sort through larger parts.

I don’t know about you, but I can easily distinguish a 1×2 from a 1×3 at a glance, whereas I need to count the studs to pick out a 1×12 from a 1×10. Technic axles are even worse! To make this precise sorting a lot easier, I designed and printed a Lego Ruler and sorting tool which I discussed in a previous article. I highly recommend using this to sort larger plates, bricks and Technics parts.

Even if your long-term goal is to sort the bricks back into the sets which they came from, you will need to temporarily store them in their sorted state. I looked into and tried several solutions, so you can pick the method which best meets your needs and budget.

As a picture speaks a thousand words, I wanted to show a few photos of my finished sorting and storage system. 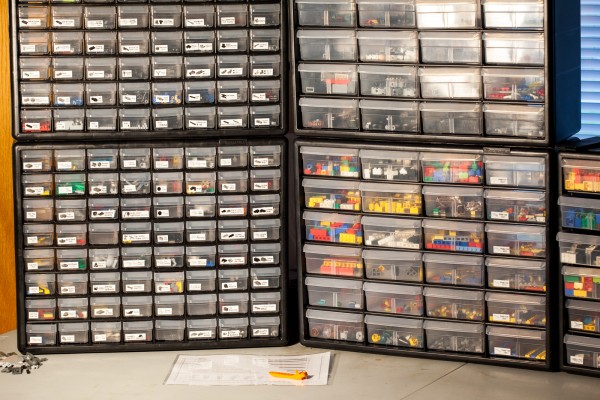 My Lego parts are sorted into these stackable drawers.

As you can see, I am using five Akro-Mils plastic drawers. I have two units containing 64 small drawers which are perfect for fiddly bits like Technic pins, clips and hinges. I have three units with 24 large drawers which I use for Bricks and Plates, since they are more common parts. I also use them for Minifigures and other larger parts. I don’t have a great storage solution for big parts like wheels, large plates and BURPS, so for now I’m using a few large plastic drawers and some gallon Ziploc bags. 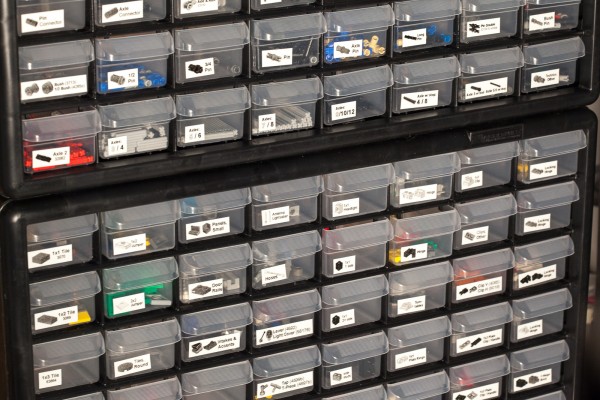 Each drawer has been carefully labeled.

I have painstakingly labeled almost every drawer using a Brother PT-1230 label maker. It allows you to print labels from your computer on waterproof labels. I created the stickers quickly using images from Bricklink, but they have worked well for me so far.

4/2/2014: I am pleased to share the files used to create these labels. You can find the link to download and print the labels in this article: Printable labels to sort your LEGO collection. I hope you find them useful!

I hope you found this article interesting. I’m very curious to hear the processes other use to sort a lot of Lego – do you do a two-pass sort also? Do you have a different way to store your sorted bricks?