Learn more at brickarchitect.com or buy it now at Amazon.com.
Today’s challenge: Build a home in the Prairie style made famous by the likes of Frank Lloyd Wright.

I’m not obsessed with Frank Lloyd Wright like many folks, but I can understand why his work appeals to the same people who enjoy building Lego models with the strong rectangular forms and emphasis on the vertical and horizontal lines in his designs. The Lego company has noticed this interest as well, since 4 of the 19 models in the Lego Architecture series are based on his buildings: Fallingwater, Imperial Hotel, Robie House, and the Guggenheim Museum. 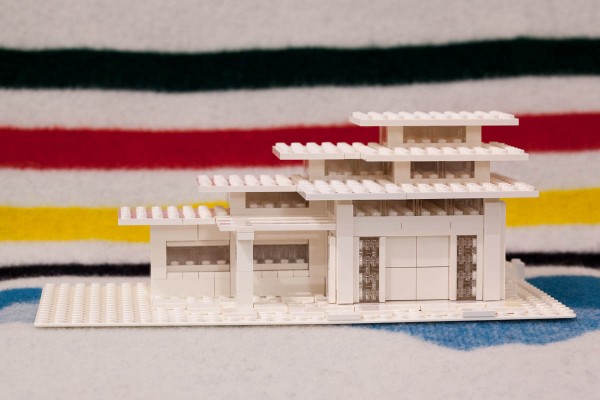 For this project, I wanted to build a home which blended interior space with an exterior patio, emphasized both strong horizontals through the repeating roof lines and strong verticals with tall slender windows. I started with the front-right corner, using a sideways (studs not on top) approach to make the front window facade. 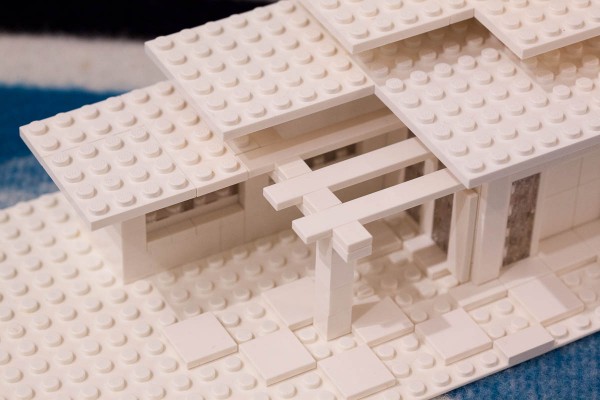 I had to stop using that approach on the left side of the home as I ran out of the needed bricks. That’s when I incorporated the pergola and a different window style for the left flank of the home. I knew i wanted part of the home to stick up from the main roofline and have a second taller flat roof, but the design to stagger the roofline in multiple terraces came out of experimentation, and the happy coincidence that the structure was 21 studs wide. That allowed four 4-stud wide window banks with a 1-stud separation between them to stagger up and to the right.

Left side of home

I’m pleased with the structure, although it feels a bit rough as I don’t have enough plates to offer a smooth roofline. (I didn’t use any bricks not included in the Architecture Studio set this time.) It was a slower build, probably due to the experimentation needed to get the horizontal window columns working correctly.