Today’s challenge: Build a model of a Fire Lookout tower in the style common throughout the Pacific Northwest.

What’s a fire lookout tower? It’s a small building with big windows that is generally perched on a mountaintop with broad territorial views. In peak season for thunderstorms, they were traditionally manned by a US Forest Service ranger. They watch for fires to start during thunderstorms and use a fire finder instrument to pinpoint the location where the fire started. For more info, check out this US Forest Service site on the history of fire lookouts. (Most were built in the 1960’s or earlier, relatively few of them still remain, and fewer still are actually manned during fire season.) 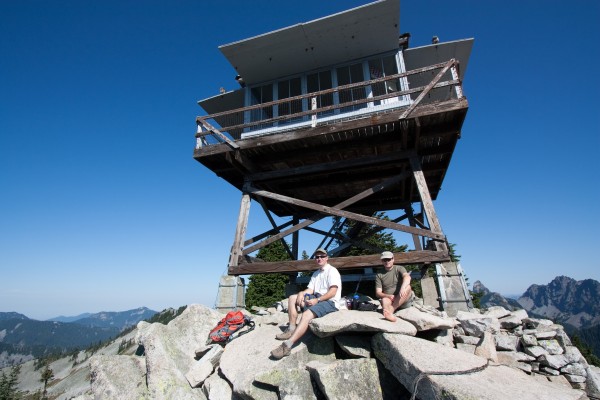 Brendan and Jason in front of the Granite mountain lookout. (Sept 13, 2009)

As an avid hiker and backpacker in my home state of Washington, I encounter lookout towers on many hikes. Today I hiked the 8 miles and 3800ft ascent of Granite Mountain, the nearest peak with a lookout tower which still remains today. I was thrilled when I got to the top to see that a volunteer USFS Ranger named Chris had opened up the lookout for visitors to see. He had even baked fresh chocolate chip cookies making him very popular. He showed me how to operate the fire finder and answered lots of questions for people. (It was a busy day on the trail, about 15 people hanging out at the summit while I was there.)

Naturally, I decided during my hike that I should build a Lego model of this quintessential northwest fire lookout design. I knew that the hardest part to get right would be the supports beneath the small platform, since they angle inward in a way which is difficult to portray with Lego bricks. I also expected difficulty in getting the roof right since I don’t have great pieces for the corners of low-angle roofs. 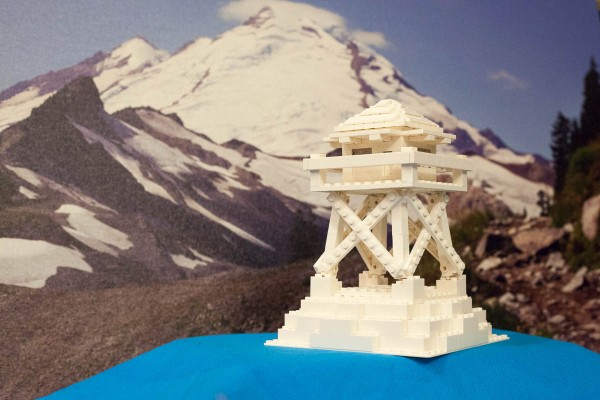 I was able to achieve the basic form pretty quickly and my predicted approach using 1×10 plates for the trusses worked better than I hoped. I hoped to add a bit more detail to the building atop the structure, but 6×6 is rather limited for nice details. I do really like the look of the folded-up window protectors. technically, they are supported from above instead of below, but it captured the feel of that architectural feature well.

Detail of the top

This is how I staged my photo using a canvas print as a backdrop.

Links to a few hikes where I’ve seen fire lookout towers up close:

It was fun to wrap up a fun day in the mountains with a thematic building project. It wasn’t my most beautiful build, but it captured the essence of the design well and I like the photos I took using a canvas print of a photo of Mt Baker as a backdrop. (No, there isn’t really a lookout at that position around the mountain.)

Again, I used a couple pieces outside of the Architecture studio set today. I needed a way to attach the truss structure to the foundation, and found that I could roughly connect them using Part #4623, Plate, Modified 1 x 2 with Arm Up.