Today’s challenge: Build a model based on the Art Deco architectural style.

I really enjoyed Challenge #5, so I’m doing the same challenge, this time inspired by the Art Deco Style.

I found a couple links that helped me get in the Deco mindset.

Examples of Deco architecture from telegraph.co.uk

After browsing a variety of images, the style points which I wanted to inspire my own building was: tall verticals such as windows, flat roofs, symmetrical construction and rounded corners.

I started by building the facade, and I put the most detail into building it. For the sides, I tried inset panels with arched peaks, but I’m not convinced it fits the style. The rear has some nice windows, but the curved roof design came out a bit weird. 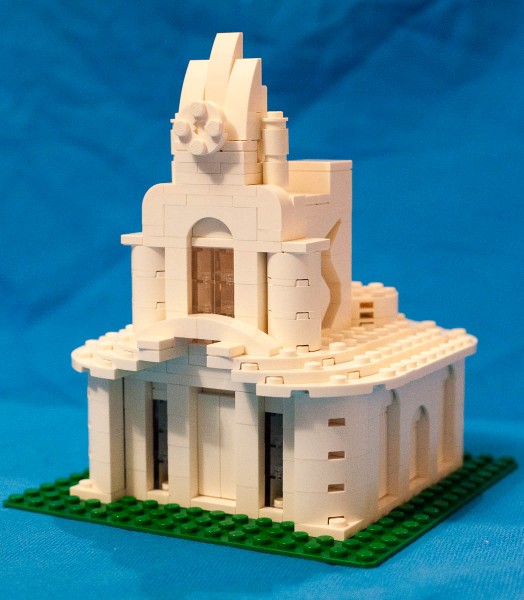 Front of my Deco-style building.

Again, I used a couple pieces outside of the core Architecture Studio set. This time I needed a svelte way to add the top of the front facade, which is built using SNOT approach. To accomplish this, I used clicky hinges, parts 30383 and 44302. I also nearly ran out of 1×2 Jumpers and need to buy at least 16 more… (part # 3794)

Rear of building featured nice windows and an attempt at a zigzag window.

For the first time, i made one wall completely blank to save time and bricks.

Front of my Deco-style building.

Examples of Deco architecture from telegraph.co.uk

This went faster than the shed-style home, but I’m not as happy with the results. Part of the challenge I had was the limited selection of curved bricks in this set – I definitely plan to buy some more curved bricks to improve the versatility of my mobile Lego studio.