Lego Challenge #6: Make a 3d model of a Lego project

There are several applications which allow Lego builders to build models using computer software instead of using real plastic bricks. I’m sure some people do this to prototype models they want to build but do not have sufficient bricks to create. I think others use this instead of building real models at all. Lastly, others use the same software to create instructions for other Lego enthusiasts to build models that they designed.

I don’t have any interest in building models in 3d software as an alternative to building with real bricks, so for this project, I simply wanted to take a model I had already built and re-create it in the computer to see how easy it is. If it were practical, I might also share instructions for building my model on my website.

In under an hour, I was able to build an accurate model of the basic structure of the home using the Lego Digital Designer tool. Modeling the roof with the hinged sections was much more time consuming, and I couldn’t figure out any way to position the roof on top of the home in that app. The Lego Digital Designer app looks easy to use, with a nice gallery on the side and seemingly straightforward controls, but it’s really limited and clumsy to use.

After that, I decided to give LeoCAD a try. (It’s one of several apps in the LDraw suite.) It did allow me to roughly position the roof on top of the home, but I never could position it quite right, nor could I get the angles of the two roof sections quite right. This app is even less intuitive to use, and I have experience with a variety of 3d design tools. I’m sure I could get things right if I had more patience and interest, but this is where I stopped. 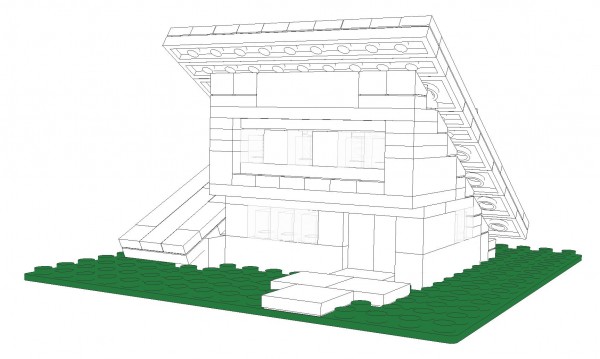 The same model with roof attached in LeoCAD software.

In closing, I do think that Lego Digital Designer is a fun tool, so long as you try to make simple structures. Unfortunately, my design wasn’t simple enough, and I struggled to recreate my design using both of these apps. It looks like it would take significantly more effort to get the beautiful 3d renderings which I have seen others create with these apps. (I might come back to this on a later date, but we’ll see…)