Lego Challenge #5: Build a model based on an architectural style

Learn more at brickarchitect.com or buy it now at Amazon.com.
Today’s challenge: Pick a distinct architectural style and build a model based on it.

I am not an architect, and I have never taken classes in Architecture. That said, I am familiar with some of the most common styles even if I can’t always refer to them by name. For today’s project, I browsed a few galleries with examples from a couple of different architectural styles, and picked one as the inspiration for a model of my own creation.

Since I don’t have any books on Architecture beyond the book that came with my Lego Architecture Studio set, I simply searched online for terms like “architectural styles”. The following are a few resources that I found helpful…

After reviewing a few styles on the WA State Architectural Style Guide, I was drawn to building a model based on a style I’m familiar with from the Pacific Northwest. There are several examples of Shed-style architecture in this area, including Sixty 01, a condo and townhome community near our home which I’m sure was built in the 1965 – 1985 timeframe associated with the style. The common traits of the examples of the style that I saw were wood exteriors and bold sloping roof-lines that rarely meet in a single peak. 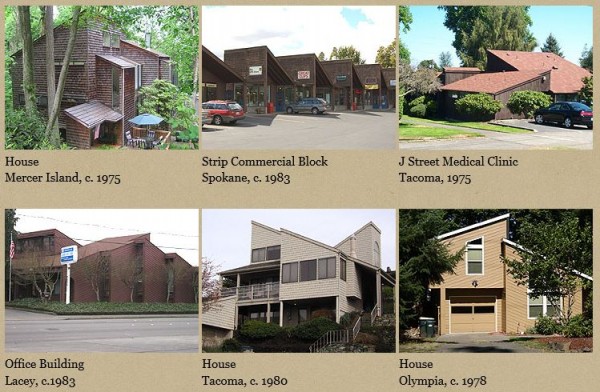 My idea for this project was to make a home with two stories in front and one in back that utilized overlapping “L” shaped roofs that come to mismatched peaks. In a real-life implementation, water management where the two roof-lines join would be a issue, but not to worry, my model is built out of plastic so it will be completely waterproof! 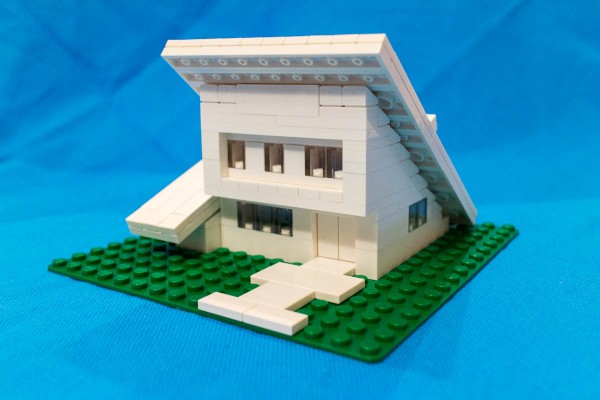 Front of my Shed-style home

Getting this angular design right required two steps which I hadn’t done on prior projects:

Even after making the prototype, I made a significant change in the final design by extending the roofline by 1 unit. This gave the home a better look and covers some of the imperfections where the roof and walls meet.

This model was complex enough that I needed to build a prototype of the roof and basic home shape.

Front of my Shed-style home

Roof Removed to see inside structure

Between researching different styles and the actual build, this was my most time consuming project yet. Thankfully, I am happy with the result. I’m particularly pleased that the finished project closely followed the idea I had created in my mind – it’s nice when the idea isn’t lost in translation. I definitely expect to repeat this project with other styles, this was a lot of fun even if it was time consuming. (I know the model is good when I really don’t look forward to taking it apart.)

Do you know of any great online resources about famous architecture or architectural styles? If so, leave a comment below.
Today’s post is part of my Lego Architecture Studio 30-day Challenge…