Today’s challenge: Build a Lego model in a public place such as a library.

Before I talk about today’s project, I want to take a moment to say “thank you” to everyone who has been reading about my Lego 30-day Challenge on my blog. Today’s post is my 30th challenge, and therefore the last in the series. Fear not, I am planning another post to wrap-up the project and a post detailing the “missing pieces” that you need to add to your Lego Architecture Studio set to make it more versatile. Who knows, I might add “bonus projects” over time as well.

I am fortunate enough to live in Seattle, home of arguably the most important new library built in many years. The Seattle Central Library was designed from the ground up to support the evolving use of libraries which blends information technology and traditional books and media. The Library is a massive structure covering a whole city block with more than 10 stories. Both the interior and exterior architectural choices are bold, unconventional and engaging. (It’s even featured in the book included with the Architecture studio set.)

Photos I took of the Seattle Central Library

The building is so oddly shaped that I didn’t dare attempt to recreate it using Lego. Instead, I hoped to capture a small room or architectural feature in Lego, and I wanted to assemble the model while inside the Library building. Unfortunately for me, the library was very busy, with nearly every computer terminal and desk in use. I would need to find an area of the library that is quiet and less commonly visited. 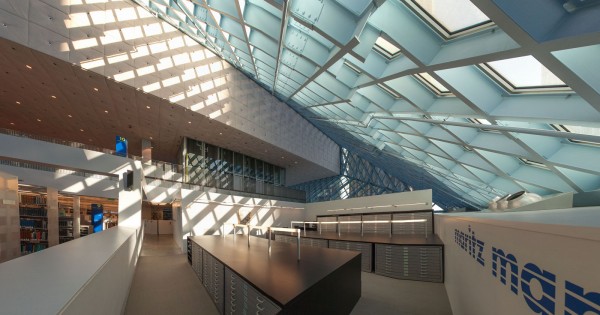 Luck would have it that the Maritz Map Room is a large space, with huge tabletops for viewing maps (or building Lego models), and it was empty. It’s a nice spot in the library too, in a brightly lit area near the top floor of the library. That’s why I decided to build a model of the map room. 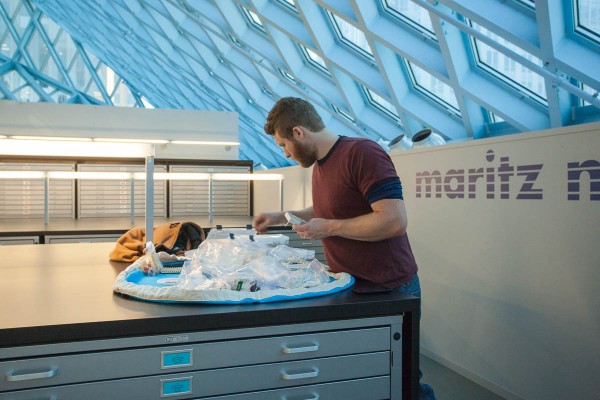 A photo of me partway through the build

Nobody bothered me as I quietly clicked bricks together to build my model. The project began by trying to figure out how to build the tables with the built-in lamps. I thought about using 1×1 bricks to hold the light fixtures up, but that was going to look too heavy compared to the actual room. As such, I used rods attached to jumpers to create the verticals and standard bricks for the fixtures. 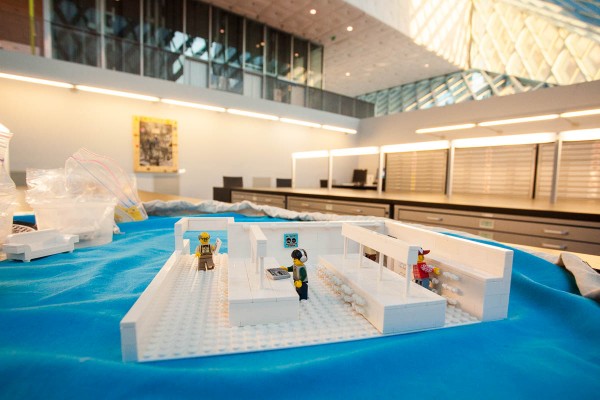 A Lego-scale library inside a full-sized library.

The Lego map room is busy 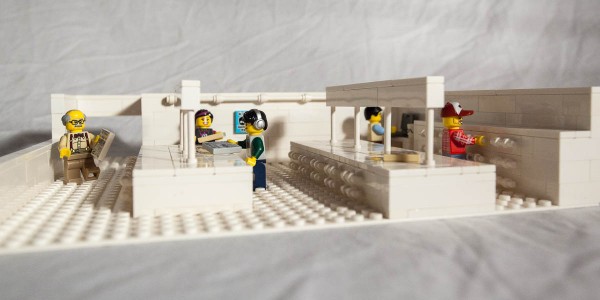 Staged photo taken at home of my Lego library

Finished model in my Swoop bag

I wasn’t sure how people would react to me building a Lego model inside the library, and I had no problems at all. A couple people on the floor above watched me for a minute, but they didn’t seem to mind. Others walked by, seemingly a bit curious. The model itself looks good, with the highlight being the map tables with the iconic lighting. I also really liked how the minifigure macros came out – they really give the space some scale and personality.